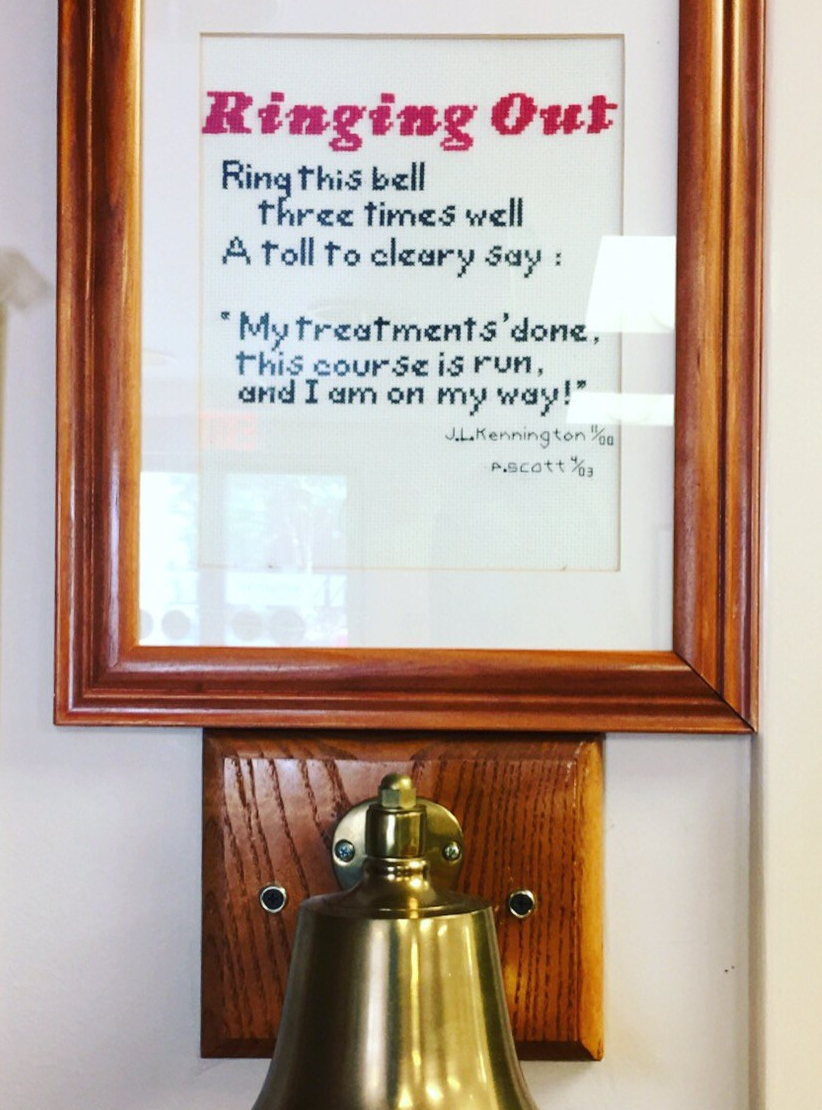 In the stillness of early morning, with darkness still overwhelming the room, I awakened from a shallow doze in a fit of coughing and sat up, bleary eyes focusing on the thin stream of golden light gently permeating the space between our bathroom door and the floor. A shadow moved across the dim brightness, the door knob turned, his gentle footsteps plipped across the room to the rhythm of his familiar gait. He walked out of the room as the coughing overwhelmed my weary body once more. Sleepless, I rose up and met him in the living room. A hand off of needed items, a few instructions, a quick good bye, and he was off to his scans in the care of a sister. I climbed back into the warmth of the heated blanket in my bed, his space beside me now empty. The coughing came again, and somewhere between the force of the evacuating air and the sharp pain in chest, a piece of my soul slipped out in words to Jesus. “Lord, I just can’t. I cannot do this again. I am out of words, out of hope, out of strength; and I am not asking you to replenish any of what’s been lost anymore. Just let me rest. Let me sleep. My God, how I long to sleep through the night and wake up without the pain of brain cancer in the morning! I’m not asking for healing. I’m done asking for provision. I just want…I want rest. This is more than I can bear.”

It did not come.

Instead, the coughing and grief tangled together with such force that I found myself up and moving about the house, trying to busy my mind with thoughts of anything other than scans, with their daunting possibility of severe allergic reactions, and the fear of what the images would tell us this time.

I know I have been distant from this writing place. The separation has been needed-intentional- on my part. Life sometimes gets to be too much for me with all of its voices and demands. I have desperately needed time to separate myself from outside influence and let my soul seek rest from two years of such constant pouring. We have been bombarded with pain after pain for what seems like always, so many around us suffering so egregiously it makes a person question everything about who they are and what value all of this could possibly have to any “god” who claims to love us.

Maybe in this moment, having read the previous words, you are wondering what I could possibly mean, since the word of God tells us so plainly that “God won’t give us more than we can bear”. Maybe you are questioning whether or not I have lost my faith (and maybe my marbles). If you’ve never read the passage, I encourage you to take a brief moment to look up 1 Corinthians 10:13, then continue to read on. Y’all, that little twisted phrase we are so fond of speaking out to the struggling is a lie born of our tendency to take one verse and make it stand alone so it meets our immediate desires of reprieve. The passage encompassing that trendy phrase is about temptation, not suffering.

Friends, had I believed for as much as a millisecond of my life that God would not give me more than I could bear, then I would have suffocated under the weight of the burden of life with brain cancer, and I would have died in the darkness of being forsaken by God, writhing around helpless in misery until despair choked the life out of me.  We are born into a life that is more than we can bear, dearest. Every one of us the same in our inability to care for ourselves, in our need to be looked after and nurtured by other hands for quite some time. Then, we get older and more capable, and still, we all grow weary of the mundane parts of life and exhausted in the struggling parts of life. There is too much sorrow, too much anguish, too much joy, too much hope for us to hold the weight of any of it for long. It is all more than we can bear. Instead of telling the suffering, and yourself, that the Lord will not give you more than you can bear, I encourage you to consider this, instead:

In 2 Corinthians 1:8-10 Paul wrote, “For we do not want you to be unaware, brothers, of the affliction we experienced in Asia. For we were so utterly burdened beyond our strength that we despaired of life itself. Indeed, we felt that we had received the sentence of death. But that was to make us rely not on ourselves but on God who raises the dead. He delivered us from such a deadly peril, and he will deliver us. On him we have set our hope that he will deliver us again.”

God will always give you more than you can bear, because the weight of every grief and grace in this life is more than any man could ever bear. He does not do this because He has forsaken us, but to “make us rely not on ourselves but on God who raises the dead”. “God who raises the dead”…how dead I am when the darkness gives way to daybreak and sleep has not come, how dead I am when fear has squeezed my heart into fits of racing, tangible terror for seemingly endless hours.  Every day, be it one where feelings are faithful or fearful, I need the Lord to do what only He can, and breathe life into my deadened self. Because He does not change as I do, He faithfully delivers me from the confines of this dead flesh my person exists in in this life, every single day, over and over and over again…He delivers me.  He. delivers. me. Whatever your suffering or rejoicing, He is asking you to surrender it to Him and let Him bear it on your behalf. He is asking you to turn over every splendid and every wretched moment to Him, just the same, and let Him take it all and make something magnificent out of it-and magnificent it will be because it has been touched by His hands. He is asking you to place your hope in Him and Him alone, and trust Him to bear it well, for your good and His glory.

So, when I find myself ill and at home on important days where unknowns are given names, having endured 10 hours of relentless panic attacks through the night and facing a long morning of waiting to understand what the shifting will be like this time, I have hope, because I know He will deliver us, again and again (rather despite my own interference and helplessness, despite the weight of the burdens I have and the way I cling to them in feeble attempt to help the Lord carry the weight of anything with strength I was not made to have).

God has given me more than I can bear. He has given you more than you can bear, too. Do not waste your suffering pouring into the lie that He is calling you to claim His strength for the sake of showing yourself strong enough in Him to bear it. Give your burden over to Him, instead. Give Him your strongest and weakest bits and pieces, alike. Open your hands and allow the Lord to take the burdens and the blessings out of them, showing Himself strong enough to bear the weight of your existence, wholly and entirely, and placing in your hands only His own grasp in place of anything else. You will not regret the outcome.

Several weeks ago, the Lord directed us very clearly toward a low dose of radiation as Jesse’s next phase of treatment. He had radiation every week day for three weeks, excluding a few days when Hurricane Harvey made roads impassable, which delayed treatment by a few days.
Today, after a few brief weeks of recovery, he had his first post-radiation scans done so that we could see whether or not further radiation would be needed (hence the sleepless night for yours truly #scanxiety).
My phone rang late morning, and I retreated to our bedroom to put it on speaker so I could hear more clearly and take notes as our doctor pulled up his results, and the discussion of what was being seen began.

“I see clear regression by 50%.”
“I am so glad, given the massive mass you had.”
“He responded beautifully.”

He responded beautifully. <—This girl ugly cried over those words (still fighting the heaving sobs, actually). His tumor had grown quite a bit since his two earliest surgeries in September and November 2015, filling in empty spaces made by the resection and extending its fingers menacingly into other parts of his brain, doing everything it could to cross the barriers into his mid-brain. No treatment we have tried has successfully slowed or stopped the growth. Today, the scans look much like they did before his tumor began to grow so aggressively, with some slight variations in thickness for the better. Today, his tumor showed the first signs we have seen that a non-surgical treatment is causing his tumor to regress. Today, after an absolutely faithless night full of fear and despair on my part, when I got out of bed with soul barely breathing, the Lord cupped my face and breathed life into rasping lungs, shouting out into the darkness, “I AM YOUR HOPE, ASHLEY!”; and then, because He is Deliverer, He wrenched me once more from the grasp of fear, put His hand in mine, filling the empty fear with His own scarred hand, and He did what only He can do…He delivered me from myself. He is an uncommon grace and love, My God, an ever present help in times of trouble, and…HE responds beautifully to our burdens with His Deliverance.

How you can pray:

-Pray that the radiation continues to do its job of destroying tumor cells.

-Pray that the unique immune system within his brain learns to recognize and attack tumor cells until they are gone.

-Pray that his seizures continue to decline in frequency and strength until they are gone entirely.

-Pray that the healthy parts of his brain remain protected from any harm.

-Pray that the Lord continue to make our paths clear in the months of waiting ahead. He will not need any type of medical intervention beyond daily seizure meds until mid-March! We are THRILLED for such a long reprieve, but know how the ‘unknowns” can creep in and whisper fear into us in the wait.

-Pray that we will yield to the ways He wants to use our story for His glory.

*We are grateful for you, friends. Always, always grateful!*

12 thoughts on “This is more than I can bear”