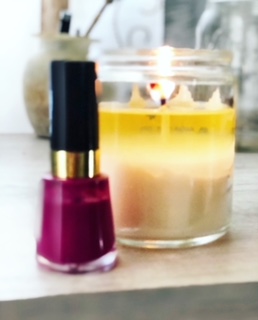 I opened the door, took a step in, and the weight of it all pressed the breath from my lungs. Maybe it was because it’s September, a month that represents the beginning of an always shape-shifting life, or maybe it was because my connecting flight left without me and I had been awake for 27 hours, but walking into our house without him, without his hand in mine. . .

I froze in the doorway, unable to process my surroundings, trying to will my mind to let my lungs free to resume the intake of air. A few, stumbling steps forward brought me to the kitchen island, gasping and suddenly trying not to vomit from the onslaught of grief.

One of the difficulties of life alongside a terminal illness is that you never know when the simple things will be the most trying of them. I wore the same nail polish on my toes for a year, at first because I only had the wherewithal to throw another coat on top of the chipped fuchsia they were the day Jesse suddenly had brain cancer, but later because they felt like the only real thing left of our lives before. I had painted them two days before his diagnosis at my sister’s house and wasn’t even certain I liked the color, but there it stayed month after month, the vibrant color lingering in contrast to the dark surroundings of my life. Between the emotional tie I felt to them and the utter lack of time to do anything about it, I just let them be. Occasionally, I would lie in bed at night, staring at the purply remnants of former life, and dissolve into tears. Other times, I would get up and splash a bit more polish over the chipped bits. I think this is an accurate representation of life as a caretaker. The minutia of life -the jot and tittle, if you will- is simultaneously everything and nothing to you. You notice the things that were with more acuity than before-the way your husband used to look at you, the affirmation found in the mutual collapse into bed after a lengthy parenting session with some undone tiny human, his hand on the small of your back in a public setting because he knew your unrest in large groups of people-but the task at hand is upholding and keeping alive, so you carry on. No time exists to polish nails…or life.

All is not lost, of course. Chipped toenail polish is proof you’ve been doing the hard work of walking forward just as scars are proof you’ve faced wounding and seen healing. There is nothing wrong with letting the grief overwhelm the moment and buckle your soul into a motionless, sickened stupor sometimes. Suffering is not a sin. Asking why. Feeling despair. Longing for freedom from pain. None of this is sinful. It’s just you being a person. You’re just human.

These experiences are human, as human as Jesus in the garden all those years ago sweating blood and begging to be freed from continuing to endure, all the while bowing in surrender to the life and death and glory He knew was coming as a result of all of that pain.

Suffering is not a sin. (While we’re at it, lack of healing does not mean you lack faith to be healed, but that’s a topic for another post, I suppose.) Friends, please don’t give up on yourself, on your lives, on the lives of those surrounding you. You can do the hard thing in front of you, and do it well. I know you can. The word of God says to “consider that the sufferings of this present time are not worth comparing with the glory that is to be revealed to us.”, and that is the truth I know well three years into this terminal cancer shindig. Your suffering is doing something both in you and through you for those around you. When you can only stare at the remnants of what was and weep over your loss, and when you have presence of mind to get up and slap some more polish over the beat up parts that remain…consider the reality that temporary suffering is just that, temporary; and it is doing something. Glory shines most splendidly through the darkness of suffering, dearest. Don’t give up.